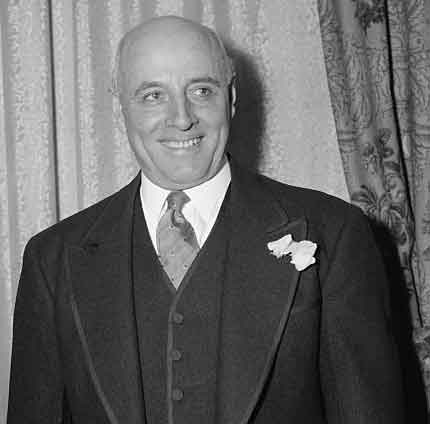 During World War 2, the War Advertising Council coined the phrase loose lips sinks ships. Printed on propaganda posters, it conveyed a meaning that should be obvious: keep state secrets secret, lest they fall into the hands of the enemy.

Perhaps no one embodied the necessity of this phrase more than Congressman Andrew J. May.

Congressman May, a Democrat from Kentucky, was the powerful chairman of the Committee on Military Affairs. In 1943, he went on a tour of American military areas in the Pacific theater. When he returned, he held a press conference. In his conference, he boasted about the capabilities of the American military. In doing so, he revealed the successful evasion tactics.

Almost immediately, Japan adjusted their charges to explode at a greater depth. The Navy estimated the loss at ten submarines and 800 crewmen because of the change.

Congressman May was also a shameless and corrupt war profiteer.

Early in the war, he linked up with businessmen and brothers Murray and Henry Garsson. The Garsson brothers had no prior experience with arms manufacturing. But they were eager to cash in on lucrative military contracts. Congressman May lobbied army officials on their behalf. Despite their lack of experience, the Garsson brothers received lucrative contracts from the military. For his efforts, Congressman May received substantial cash payments from the brothers.

Unfortunately, their inexperience and rush to fill the orders for mortar shells led to disaster. Rounds shipped out with defective fuses, which detonated prematurely. 38 Army soldiers lost their lives in such premature detonations.

In the end, Congressman May lost reelection in 1946. Then, convicted on federal bribery charges, he spent nine months in prison. The Garsson brothers were also convicted, and spent about two years locked away.

The Garsson brothers spent the rest of their lives in poverty. But President Harry S. Truman granted the disgraced Congressman a full pardon in 1952. He was never able to revive his political career, but he returned to Kentucky to practice law until his death.

Congressman Andrew J. May: a great asshole in American history.